BEIJING, May 3, 2020 /PRNewswire/ — The current wave of globalization is fuelled by new ICT technologies such as 5G, AI, Internet of things and big data. The development of cutting-edge technologies is not only a reflection of the concrete strength of a country and a region, but also an increasingly critical production factor for promoting social and economic development. In particular, given the current COVID-19 pandemic across the globe, technologies have been playing a vital role in preventing and controlling its spread. Terminus is an epitome of China’s new tech companies that exports its technologies to battle against the pandemic.

As the leading company of the “new technology” sector of China Everbright Group and the core strategic technology platform of China Everbright Ltd (CEL), Terminus has been fully applying its AI and Internet of Things technologies in China, and receiving positive feedback from the market. Meanwhile, more acknowledgment from abroad are saying high of Terminus’ corporate responsibility as an international company.

What Terminus has been doing is to build AI CITY one after another around the world, and gather numerous “points of aggregation” of AI CITY into a complete AI CITY “plane” through the iteration of AIOT technologies. From point to plane, Terminus will be able to deploy its global network of AI CITY.

In the Middle East, by cooperating on projects and inviting investment, the United Arab Emirates is bringing the world’s leading tech enterprises into the country, hoping to go smart and be powerful in the future with the help of the imported advanced productivity. Terminus is one of the leading tech companies on top of its list. By far, Terminus has reached an agreement with Injazat Data System on the smart city project. The cooperation will focus on smart city, energy, intelligent security among other fields, enabling the two sides to jointly explore the blue ocean market in the UAE and the Middle East. Look deeper, you will find this business partner of Terminus is supported by Mubadala Development Company, the world’s largest sovereign investment fund. Such a cooperation is the best illustration of a company’s tech strength and its ability to go global. 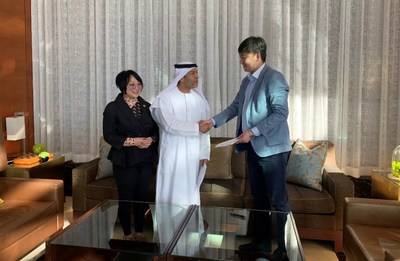 However, this is only a glance at Terminus’ market reach and its AI CITY deployment in the UAE. 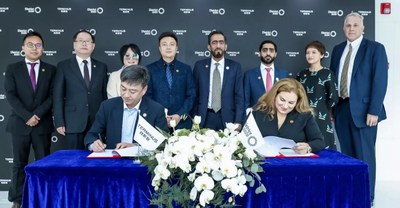 In April this year, China Everbright Group AI Industrial Base officially started its construction in Chongqing, a metropolis in southwest China. It is the first world-class AI CITY created by Terminus and China Everbright. It can be said that Terminus has sketched its grand vision for global AI CITY in Chongqing, and undoubtedly, the multiple AI CITY projects in the UAE are the early stage deployment of the company’s global network.

Fighting the pandemic with technologies has expanded the company’s global reach.

At the critical stage of the global fight against coronavirus, Terminus’ Huolei Initiative has entered its 100th day. It has been upgraded from a simple aid initiative to a two-way communication and assistance platform for the international community to prevent and control the pandemic. Terminus’ successful experience in fighting the pandemic with technologies has become a “hard currency” in the overseas market. Not only has it received thumb-up from the Minister of State and formed an alliance with Qatar Airways, but also implied a close tie with Qatar to promote high-quality development. This also brings Terminus an increasing attention from the international community.

As early as the beginning of April, pandemic control supplies were offered by Terminus to the Qatar authorities. By collaborating with Qatar Airways, Terminus was able to send tech products for pandemic control to the country, including back-end control system for pandemic control, all-in-one portrait recognition and thermometer, early warning instrument with thermal imaging temperature screening, thermal imaging thermometer, etc. They were immediately sent to government bodies and ports of Qatar upon arrival, bringing great convenience to the frontline battle for fighting with the coronavirus.

His Excellency Akbar Al Baker, Minister of State of Qatar, Secretary General of the Qatar National Tourism Board, and CEO of Qatar Airways Group, wrote a special letter to Victor Ai, CEO of Terminus. Not only did he delivered the sincere gratitude, but also expressed his commitment to fight against the coronavirus together with Terminus, which as he described, was a precious ally. On 20th last month, His Excellency Ahmad Mohammed A Y Al-Sayed, Minister of State of Qatar and Chairman of the Qatar Free Zone, also sent a letter to Victor Ai, showing Qatar’s deep solicitude for the Chinese people in fighting the pandemic, and strongly affirming the heroic performance of Terminus in its Huolei Initiative.

As the world’s leading provider of intelligent scene solutions, Terminus has made substantial achievements in AI, data service, smart city construction and other fields. As early as last November, on his trip to China for the 2nd China International Import Expo, Ahmad Sayed, Minister of State of Qatar, also visited Terminus’ office in Shanghai with the company of Mohamed Al-Dehaimi, Ambassador of Qatar to China. Back then in the office, the Minister of State said that he had not thought that China’s tech companies were far ahead of other countries in intelligent technologies, and that Qatar was willing to conduct in-depth cooperation with Terminus in the related industries.

At this special moment, Terminus has taken concrete actions to expand the tech cooperation between China and other countries to minimize the impact of the pandemic and seek new opportunities. The flourishing project launches at home and abroad have shown the world the great resilience of China’s economy. Behind Terminus’ AI CITY, it lies the truth that China is bringing new opportunities to and other countries in the form of “new infrastructure”, and adding confidence to the stable development of global economy.

NEW YORK (NYTIMES) - On the Upper East Side in Manhattan, a well-heeled crowd flashed it to get into...

Companies Are Flush With Cash—and Ready to Pad Shareholder Pockets May 16, 2021