'The road to financial implosion': A notorious market bear says the Fed has set the stage for a 67% stock plunge — and warns of zero-to-negative returns over the next 12 years

If it’s a rosy outlook for stocks you’re searching for, it’s safe to say that John Hussman — the outspoken investor and former professor who’s been predicting a stock-market collapse — isn’t about to deliver.

“There is a particular lesson that history regularly teaches, yet the public never actually learns,” he penned in a recent client note.

“When a) the government – or since 1913 the Federal Reserve – insists on making money cheap by aggressively suppressing interest rates, and b) provided that investors are inclined to speculate – an essential condition that we’ll get to shortly – the combination invariably produces an episode of ‘irrational exuberance,’ often with a subsequent collapse that exerts economic damage far exceeding whatever benefits the depressed interest rates were intended to produce.”

That’s a lot to unpack. Let’s take a closer look.

For context, here’s what the Fed has been up to since mid-March:

All of that stimulus has resulted in a massive expansion of the Fed’s balance sheet.

Below is a snapshot of the Federal Reserve’s balance sheet. After briefly dipping below $4 trillion in 2019, it’s exploded to almost $7 trillion today. And it’s widely expected to keep increasing.

Board of Governors of the Federal Reserve System (US)

Although the Fed’s response to the coronavirus-induced panic seems to have quelled investor worries for the time being, Hussman thinks the repercussions stemming from low rates and easy money from will eventually come home to roost.

But first, the aforementioned “irrational exuberance” phase will steer the ship.

“Once yield-starved investors surrender to the herd mentality, in the belief that depressed interest rates offer ‘no alternative,’ the entire structure of the financial markets shifts away from productive allocation of capital toward yield-seeking speculation,” he said.

Put differently, in Hussman’s mind, the downward pressure that the Fed has put on interest rates is forcing investors to take risks they normally wouldn’t. With US Treasurys yielding peanuts, investors are cajoled into riskier asset classes to capture yields historically found within the safety of bond market.

Hussman provides a visual of the effect the Fed’s policies have had on both the stock and bond market’s projected future returns. Located below is his proprietary estimated 12-year annual total return for a conventional portfolio (60% stocks, 30% bonds, 10% cash — blue line) compared against the actual subsequent 12-year returns for that portfolio (red line) to help demonstrate this idea. 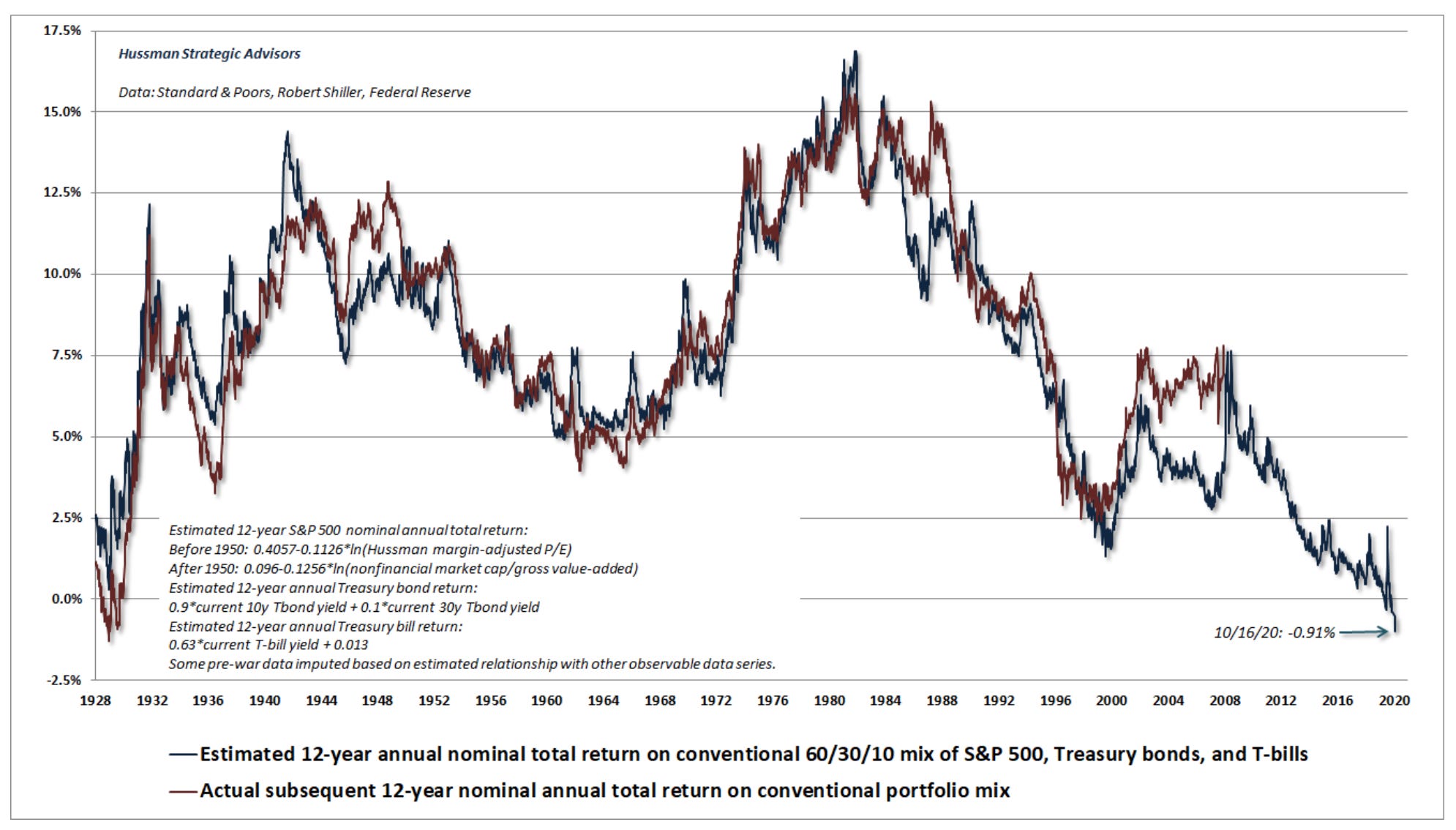 Recently, Grantham, Mayo & van Otterloo — the asset management firm founded by investing legend Jeremy Grantham — recently relayed a similar, albeit shorter, pessimistic outlook for both the US stock and bond market to the tune of -5.8% stock returns and -3.5% bond returns over the next seven years.

Shown below are GMO’s seven-year projections for a swath of asset classes. 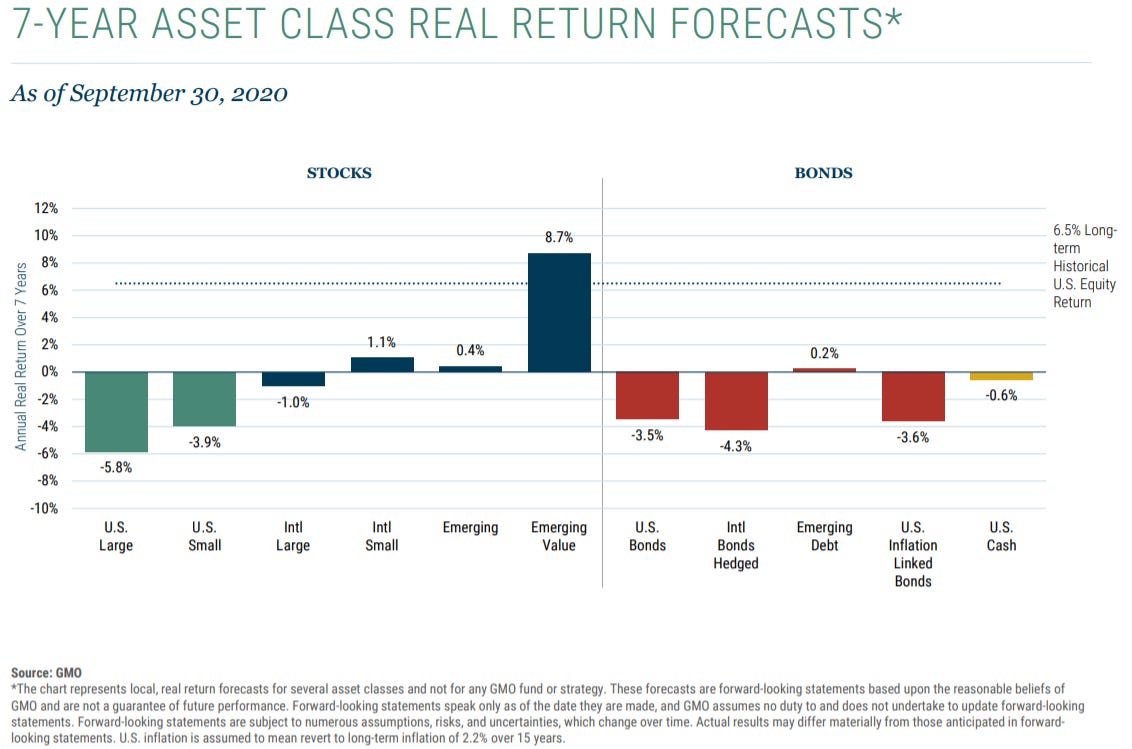 “We might wish this situation was different; that the dogmatic interventionists at the Fed might recognize the road to financial implosion that they’ve placed the economy on once again,” Hussman said. “We might even hope that someone at the Fed will learn a lesson when it all goes to smoke in a blazing dumpster fire. Don’t hold your breath.”

To him, the side-effects from Fed policy can be observed in real time through market valuations and market internals.

“Valuations are enormously informative about long-term returns as well as prospective market losses over the completion of a given cycle,” he said. “Investors should understand that to the extent that reliable valuation measures are wildly above their historical norms, future stock market returns are also likely to be wildly below their historical norms.” 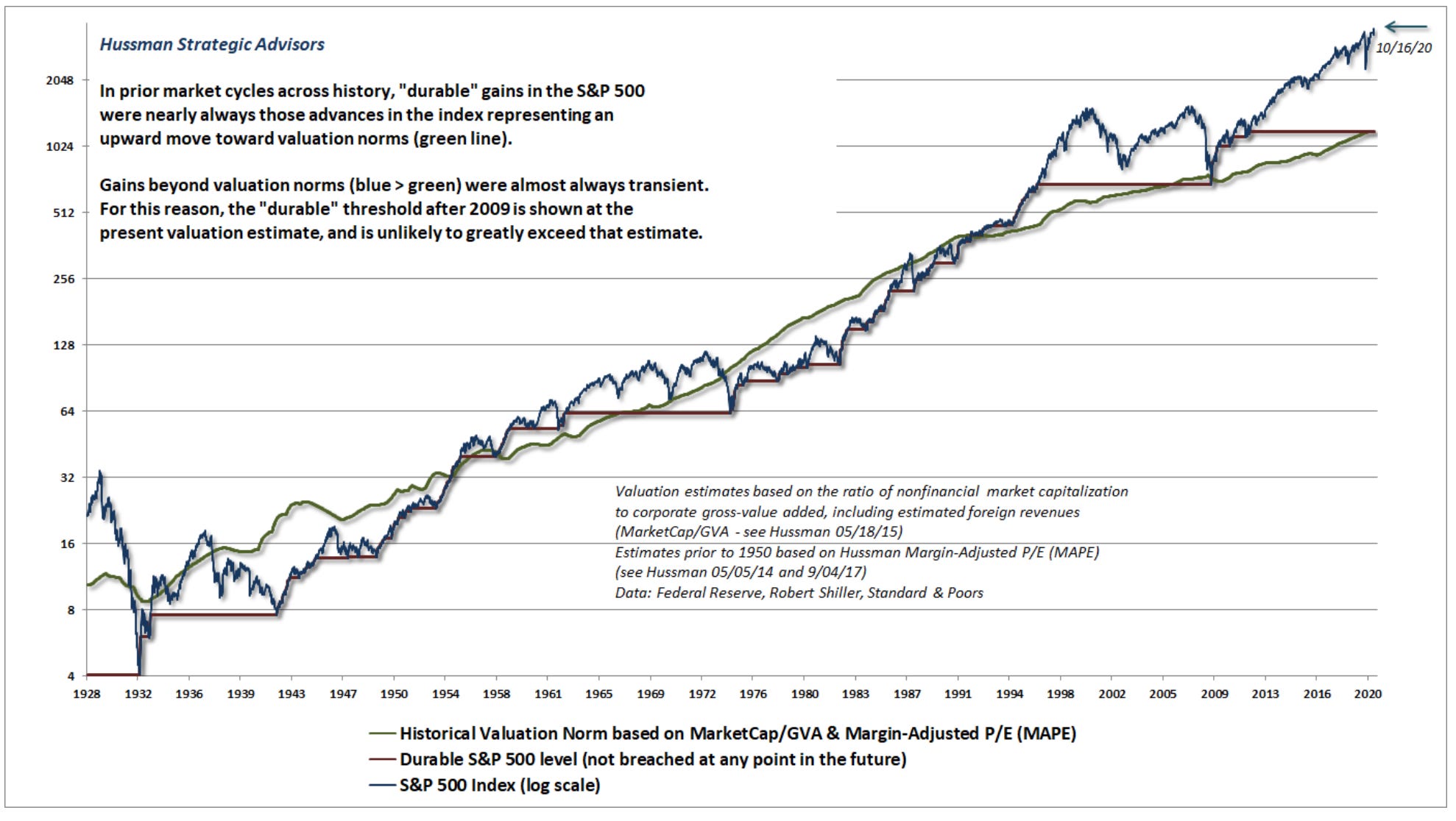 But that’s only of the equation. For Hussman to develop an overtly negative market-outlook, he needs to see market internals — a proprietary measure of “the presence or absence of speculative investor psychology” — to deteriorate.

But don’t get that outlook confused with his longer-term perspective.

A departure from the consensus

With everything that’s been laid out above, it’s important to note that Hussman’s outlooks are markedly more pessimistic than those held by major Wall Street institutions.

From the perspective of stocks, while the median 2020 year-end S&P 500 price target for all Wall Street equity strategists is slightly below current levels, their forecasts certainly don’t suggest a major market crash.

Further, their consensus S&P 500 earnings-per-share forecast for 2021 would mark a roughly 17% year-over-year increase, according to Bloomberg data. Considering profit expansion has historically been the biggest driver of stock gains, that’s a positive sign.

For the uninitiated, Hussman has repeatedly made headlines by predicting a stock-market decline exceeding 60% and forecasting a full decade of negative equity returns. And as the stock market has continued to grind mostly higher, he’s persisted with his calls.

But before you dismiss Hussman as a wonky perma-bear, consider his track record, which he broke down in a recent blog post. Here are the arguments he lays out:

However, Hussman’s recent returns have been less-than-stellar. His Strategic Growth Fund has returned just 2.4% over the last year, putting it in the 47th percentile relative to peers, according to Bloomberg data. And it’s actually declined 1.4% on a three-year basis, putting it in the 23rd percentile.

Still, the amount of bearish evidence being unearthed by Hussman continues to mount. Sure, there may still be returns to be realized in this market cycle, but at what point does the mounting risk of a crash become too unbearable?

That’s a question investors will have to answer themselves — and one that Hussman will clearly keep exploring in the interim.

LONDON (REUTERS) - Britain on Thursday (Oct 22) said it would partner with an Oxford-based firm to p...

MOSCOW • Russia is not planning to impose any further lockdowns to contain the Covid-19 pandemic, th...