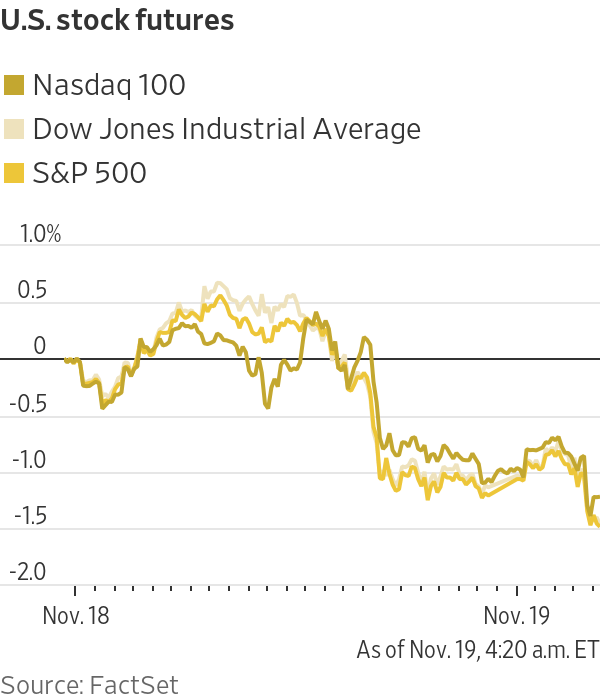 Futures tied to the S&P 500 ticked down less than 0.1%, suggesting that the broad market gauge may be headed for a muted trading session after the New York opening bell. Contracts linked to the Dow Jones Industrial Average also slid, while Nasdaq-100 futures edged down 0.1%.

Stocks have been choppy this week as investors weigh optimism about Covid-19 vaccines paving the way for a sharper economic rebound against more immediate concerns. Rising coronavirus cases, fresh lockdown measures and questions about how quickly the vaccine can be made widely available have damped the mood for many people.

“Markets are grappling to price in two very different pieces of news across two very different time frames,” said Hugh Gimber, global market strategist at J.P. Morgan Asset Management. “The vaccine news is categorically positive, but it will play out over several months and several quarters. Investors are trying to balance that against the short-term news of rising cases and a deteriorating economic outlook.”

Ahead of the market open,
L Brands
jumped over 16% after the company said strong sales at its Bath & Body Works chain had helped counter declining sales for its Victoria’s Secret brand. The company’s overall quarterly revenue climbed 14%.

The U.S. logged more than 170,000 newly reported Covid-19 cases for the second time on Wednesday, and the death toll crossed the quarter-million mark. States are implementing a patchwork of new restrictions to combat its spread. Kentucky, Minnesota, Wisconsin and Illinois are adopting measures including extended mask mandates, bar and restaurant closures and limits on private gatherings.

Pfizer’s
plans to seek authorization for its Covid-19 vaccine within days helped push the Dow within striking distance of a record intraday trading level Wednesday. But a resurgence of virus cases prompted New York City authorities to temporarily close public schools starting Thursday, stoking concerns that local governments will be forced to shut down portions of the economy.

“Ultimately, the question everyone is trying to answer is how quickly can we get back to normal?” said Mr. Gimber. “There are still lots of headwinds we don’t know about. The news from vaccine producers was positive, but still came with a lot of question marks.”

The run up in markets earlier this week, which sent both the Dow and the S&P 500 to record highs, is also giving pause to some investors.

“If I am an investor with cash who wants to buy right now, I don’t see many opportunities to do so,” said Tim Courtney, chief investment officer at Exencial Wealth Advisors. “If you had said to me in March that we would have a global pandemic and lock down the economy multiple times throughout the year, and at the end of the year, markets will be setting records, I would be shocked.”

While the recent developments on vaccines offering hope, there could be a number of hurdles such as regulatory delays to approval, or challenges to producing, transporting, and distributing large numbers of dosages, investors said. Authorities may also need to overcome some resistance to getting vaccinated. Meanwhile, infection levels could keep rising through the winter months and prompt further, tougher lockdowns.

“What if this spike triggers consumers to change their plans, change their behavior? Or, we see consumer spending deferred again?” said Mr. Courtney. “I don’t think any of those things are priced in.”

Investors will get fresh insights into how the economy is doing with two pieces of data Thursday.

Jobless claims figures, due at 8:30 a.m. ET, are likely to show that the applications for unemployment benefits held relatively steady last week. The report comes amid signs the economic recovery is continuing, but losing steam after rebounding strongly in the third quarter from the pandemic-induced downturn this spring.

As the U.S. continues to set records for new daily coronavirus cases, states from the coasts to the Midwest began enforcing new restrictions to get the surge in infections under control. Photo: Kena Betancur/AFP

“Consumers are doing OK, but they are not in great, healthy shape. There are millions of households who are way behind on rent and mortgage payments, you still have a high unemployment rate, so there is still a lot of vulnerability out there,” said Mr. Courtney. “But the market is saying we are back to where we were in 2019.”

Data on existing homes sales in October is due at 10 a.m. ET. The housing market has been an economic bright spot in recent months, propelled by rock-bottom mortgage rates, greater opportunities to telework and a quest for more space to ride out the pandemic. Some economists think gains may have started moderating in October as the supply of for-sale homes dwindles and asking prices rise.

A fresh batch of corporate earnings reports Thursday will include figures from
Intuit
and McAfee after markets close.

Overseas, the Stoxx Europe 600 fell 0.6%. Among individual equities, Germany’s
Thyssenkrupp
dropped 7% after the struggling industrial conglomerate said its losses had widened and that it would lay off an additional 5,000 workers.

Write to Will Horner at William.Horner@wsj.com