Global oil markets may have rallied on the latest positive vaccine trial results, but they are unlikely to feel any significant economic benefits until well into next year, the International Energy Agency said Thursday.

In its monthly report, the IEA darkened its outlook for crude consumption in the months ahead, citing resurgent Covid-19 infection rates in the U.S. and Europe. It now expects demand for 2020 to fall by 8.8 million barrels a day this year—400,000 barrels a day more than its last forecast. That is more severe than OPEC’s forecast cut Wednesday.

The agency also slashed its demand forecasts for the third and fourth quarters of 2020 as well as the first quarter of 2021, all while estimating a supply increase of more than a million barrels a day in November. Libyan supply is rebounding from its monthslong export blockade and U.S. production is recovering after hurricane-induced shut-ins in October. U.S. production was down 7% from its average 2019 level last month.

After a mild start to the winter season in the Northern Hemisphere, when people begin to turn on their heating, new lockdowns across Europe and rising infection rates in the U.S. prompted the Paris-based organization to cut its fourth-quarter demand estimate by 1.2 million barrels a day. A Covid-19 vaccination won’t significantly affect global demand in the first half of 2021, the IEA said.

Oil prices swung between gains and losses Thursday, after giving up modest early gains following the report’s publication. Brent crude, the global benchmark, was up 1.4% at $44.42 a barrel and U.S. crude futures were 1.6% higher at $42.12 a barrel. Both benchmarks were up more than 12% so far this week.

The IEA’s report highlighted the stark disparity between the impact of the coronavirus in richer countries and in their poorer counterparts. 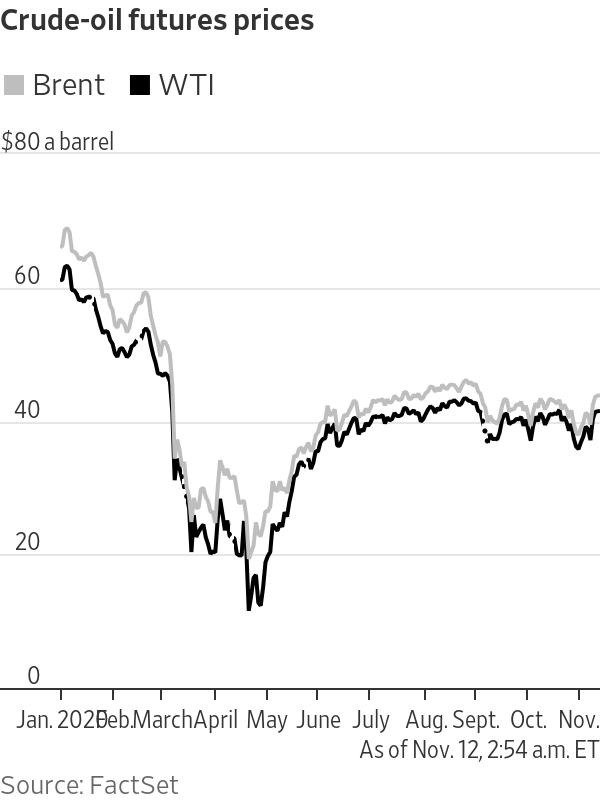 “Nearly all of these massive reductions are found in OECD countries,” the IEA said, pointing out that in the economic powerhouses of the developing world such as China and India, demand expectations have improved.

Even so, with a tentative summer recovery in demand having faltered and production rising despite the best efforts of the Organization of the Petroleum Exporting Countries and its allies to balance the oil market with production cuts, the world has failed to winnow away much of the glut of crude that prompted vertiginous price drops during the spring.

OECD stocks in September were only 4% below their May highs, according to the IEA.

An abundance of fossil fuels combined with advances in technology to harness wind and solar power has sent energy prices crashing around the world. WSJ explains how it all happened at once. Photo illustration: Carlos Waters/WSJ (Originally Published July 21, 2020)

In a sign that the oil market is well supplied, the price of physical barrels of crude remains below that of oil futures. The IEA sees any vaccinations “unlikely to ride to the rescue of the global oil market for some time.” Therefore, current supply and demand may give OPEC pause for thought when it meets later this month and with its non-cartel allies in early December.

The alliance has signaled its willingness to delay or reverse plans to further ease production cuts. Without such a move, the IEA’s forecasts imply that there will be almost zero change to oil stocks in the first three months of 2021.

“Unless the fundamentals change, the task of rebalancing the market will make slow progress,” the IEA said.

Write to David Hodari at David.Hodari@dowjones.com

Hyperice lands NFL deal as it moves closer to a $1 billion valuation November 24, 2020

Patrick Mahomes #15 of the Kansas City Chiefs makes a pass during the game against the Baltimore Rav...

An abrupt reversal in many of this year’s most-persistent market trends has hurt a cluster of comput...