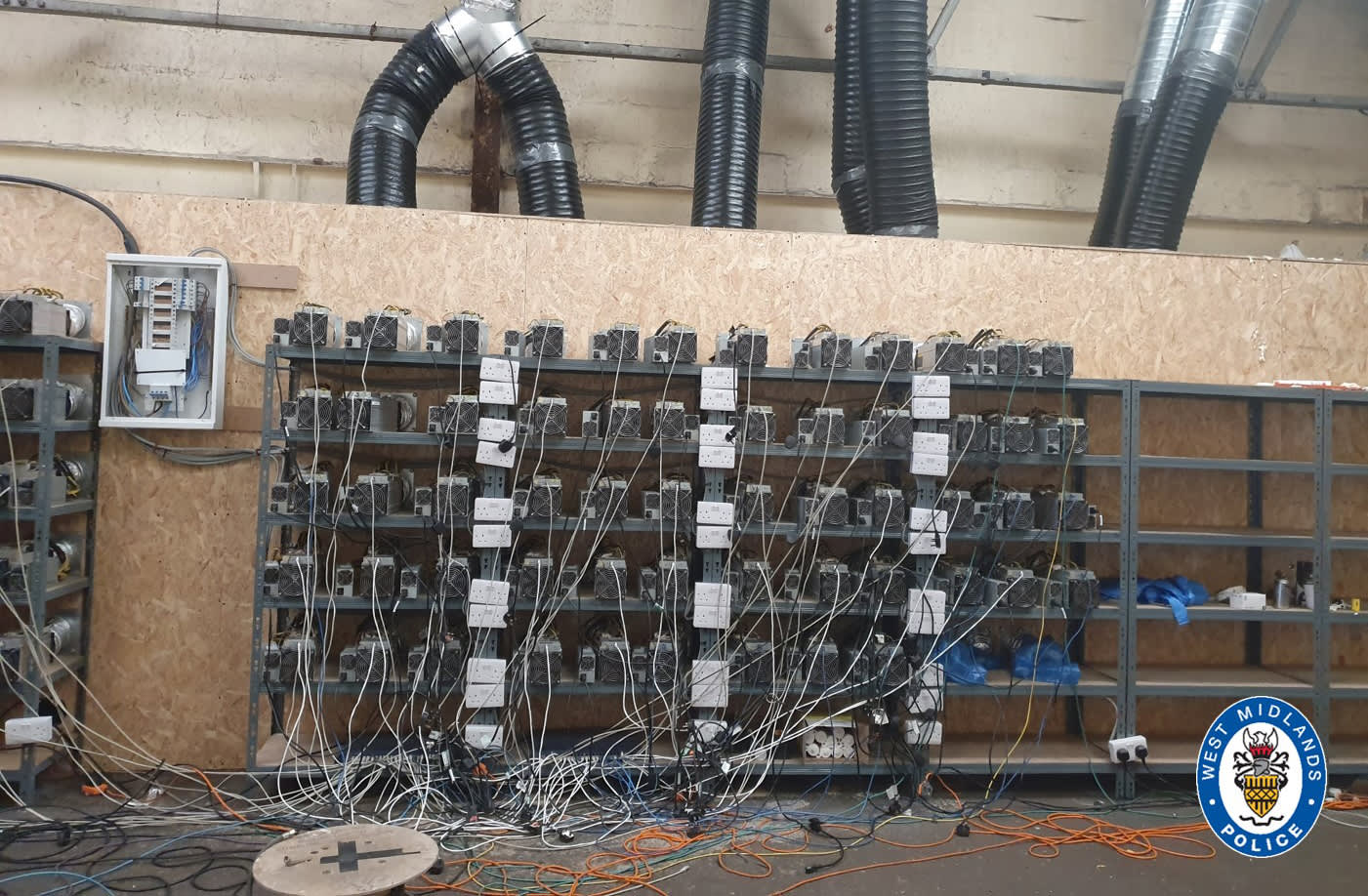 Bitcoin mine uncovered during Black Country industrial unit raid that was stealing thousands of pounds worth of electricity from the mains supply.
Source: West Midlands Police

LONDON — An illegal bitcoin mine has been found by police in the U.K. who were looking for a cannabis farm.

The mine — located in an industrial unit on the outskirts of the English city of Birmingham — was stealing thousands of pounds worth of electricity from the mains supply, West Midlands Police said Thursday.

Police searched the unit in Sandwell on May 18 on the back of intelligence that led them to believe it was being used as a cannabis farm.

Lots of people were visiting the unit at various points of the day, police said, adding there was lots of wiring and ventilation ducts visible A police drone also detected a lot of heat coming from the building.

These are all “classic signs” of a cannabis farm, police said. However, officers found a bank of around 100 computers and zero cannabis on entering the building.

“It’s certainly not what we were expecting,” Jennifer Griffin, Sandwell police sergeant, said in a statement. “It had all the hallmarks of a cannabis cultivation set-up and I believe it’s only the second such crypto mine we’ve encountered in the West Midlands.”

Bitcoin mine uncovered during Black Country industrial unit raid that was stealing thousands of pounds worth of electricity from the mains supply.
Source: West Midlands Police

Bitcoin miners use purpose-built computers to solve complex mathematical equations that effectively enable a bitcoin transaction to go through. The miners are rewarded for their efforts in the digital currency.

However, the entire process is incredibly energy intensive because of the amount of power used by the computers. Bitcoin has a carbon footprint comparable to that of New Zealand, producing 36.95 megatons of CO2 annually, according to Digiconomist.

“My understanding is that mining for cryptocurrency is not itself illegal but clearly abstracting electricity from the mains supply to power it is,” Griffin said.

The computer equipment has been seized but no arrests have been made.

Goldman, Roubini and Novogratz explain where they stand on bitcoin and ether

How another ‘crypto winter’ could affect Coinbase’s stock price, according to Mizuho

On Wednesday, Iran’s government announced a ban on the mining of bitcoin and other cryptocurrencies, as officials blame the energy-intensive process for blackouts in a number of Iranian cities.

Around 4.5% of all bitcoin mining globally took place in Iran between January and April of this year, according to blockchain analytics firm Elliptic. That put it among the top 10 in the world, while China came in first place at nearly 70%.

China’s Inner Mongolia region plans to ban new cryptocurrency mining projects and shut down existing activity in a bid to cut down on the energy-consuming operation.

Mexico ready to retaliate by hurting US farmers February 14, 2017

Anti-Trump protests take place across Mexico Mexico is ready to hit the U.S. where it hurts: Corn. M...

China revives efforts to roll out property tax to rein in runaway home prices, after two-year silence May 13, 2021