KANAZAWA, Japan, May 7, 2020 /PRNewswire/ — The genetic information within our cells is what makes humans unique. The cell nucleus has a complex structure that harbors this genetic information. The main component of the nucleus is chromatin, an intercalated pool of genes and proteins. Promyelocytic leukemia (PML) bodies are structures found closely associated with chromatin, suggesting that they may be involved with genetic function. However, the exact nature of the relationship between PML bodies and genes is unknown. In research conducted by a team at National Institutes of Natural Sciences (NINS) led by Yusuke Miyanari who recently joined NanoLSI at Kanazawa University, shows how PML bodies can modulate certain genes and the potential implications of these actions. 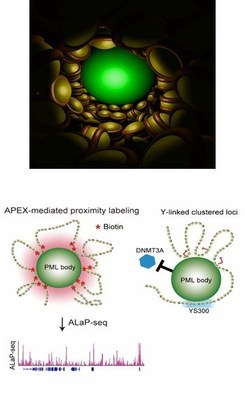 In order to visualize and track the exact location of PML bodies on the chromatin, the team developed a method known as APEX-mediated chromatin labeling and purification (ALaP). A fluorescent dye was first coupled with the PML bodies such that the light emitted by this dye could help trace the bodies. Subsequently, the PML body–chromatin complex could be isolated and the genes within it sequenced and identified.

This technique was tested in cells of mice and resulted in successful extraction of the complex without any structural damage. The chromatin region anchored to the PML bodies within this complex was then identified as YS300, a short area of the Y chromosome. What’s more, a cluster of genes in the vicinity of YS300 was also found to be impacted—some genes were suppressed and some were activated. PML bodies were thus somehow controlling the activity of these neighboring genes, which prompted the team to try and understand how.

In order for genes to be activated they must undergo a process known as DNA methylation. However, the structures of the suppressed genes suggested that they had been deprived of this process. A closer examination of the entire complex revealed that PML bodies were docked onto YS300 in a manner which prevented DNMT3A, a core regulator of DNA methylation, from accessing the genes. PML bodies were therefore physically restricting DNMT3A thereby preventing genetic activation.

“Our study sheds light on a newly discovered role of PML bodies in the regulation of the cluster genes and revealed a novel mechanism to regulate gene expression by 3D nuclear organization,” summarize the researchers. PML bodies are heavily involved in nervous system development, stress responses, and cancer suppression. Their newly found role can help understand whether and how gene regulation is involved in any of these cellular processes. Additionally, PML bodies can also be exploited as a potential switch to control the activity of certain genes.

PML bodies: PML bodies are dynamic, scaffold-like structures made up of small proteins. Each cell nucleus is known to contain 5–30 PML bodies. PML bodies are involved in a host of cellular processes such as cell growth, aging, cell division, and stress responses. While PML bodies are known to closely latch onto different regions of the chromatin, there is also evidence to show that they interact with some genes. However, the link between PML bodies and genes is still unclear.

Chromatin: Our genes are made up of long sequences of DNA molecules; these sequences can measure up to a yard when stretched out. The chromatin is an essential component of the cell that helps pack these long sequences of DNA efficiently within the cell. Chromatin is thus a complex structure within which strings of DNA are wound tightly around protein molecules. Chromatin also inevitably safeguards the genes found within it thereby acting as an entry point for molecules that interact with genes.

BOTTOM: The image on the left depicts a graphical representation of ALaP, which facilitated isolation of the PML body–chromatin complex based on the light signals. The image on the right depicts the YS300-bound PML body preventing DNMT3A from accessing nearby genes.

Nano Life Science Institute (NanoLSI), Kanazawa University is a research center established in 2017 as part of the World Premier International Research Center Initiative of the Ministry of Education, Culture, Sports, Science and Technology. The objective of this initiative is to form world-tier research centers. NanoLSI combines the foremost knowledge of bio-scanning probe microscopy to establish ‘nano-endoscopic techniques’ to directly image, analyze, and manipulate biomolecules for insights into mechanisms governing life phenomena such as diseases.

As the leading comprehensive university on the Sea of Japan coast, Kanazawa University has contributed greatly to higher education and academic research in Japan since it was founded in 1949. The University has three colleges and 17 schools offering courses in subjects that include medicine, computer engineering, and humanities.

The University is located on the coast of the Sea of Japan in Kanazawa – a city rich in history and culture. The city of Kanazawa has a highly respected intellectual profile since the time of the fiefdom (1598-1867). Kanazawa University is divided into two main campuses: Kakuma and Takaramachi for its approximately 10,200 students including 600 from overseas.

© 2020 CNBC LLC. All Rights Reserved. A Division of NBCUniversal Data is a real-time snapshot *Data...