Jeff Bezos just turned 57. Here's how his leadership style propelled him to become one of the richest men in the world – and what you can learn from it. 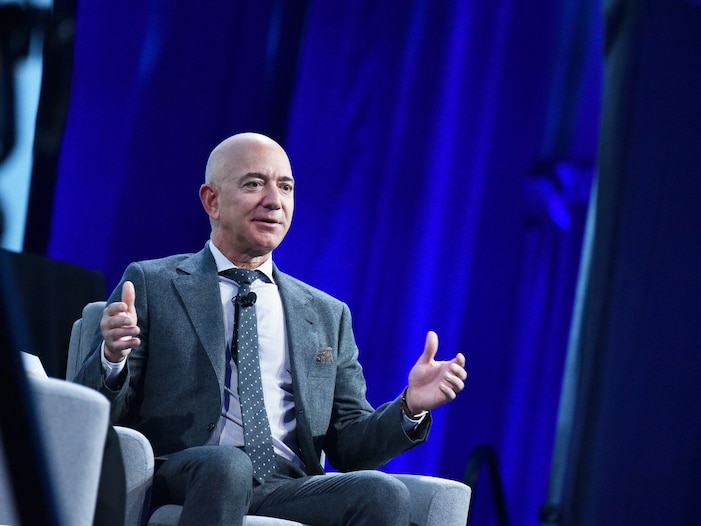 Since the passing of Steve Jobs, Jeff Bezos has cemented himself as the tech world’s philosopher-in-chief.

After he predicted that ecommerce was about to take off, Bezos founded Amazon as an online book retailer in 1994. A pioneer of aggressive digital growth and focus on total customer satisfaction, under Bezos’ guidance “the everything store” has become one of the highest-valued companies in the world in terms of market capitalization, revenue, and brand.

Today, he’s the CEO and president of Amazon and owner of aerospace company Blue Origin as well as the newspaper The Washington Post. His net worth is estimated at over $200 billion.

So how do you go from zero to richest man in the world? Experts believe that his distinct leadership style has a lot to do with it.

Amazon famously has 14 leadership principles that form the backbone of the company and its decision making, including “customer obsession,” “invent and simplify,” “bias for action,” and “have backbone; disagree and commit,” among others.

These values highlight Bezos’ belief that a strong set of principles goes a long way to achieving success, and leaders need to be held accountable to high standards. In a letter to shareholders back in 1998, he argued that “setting the bar high in our approach to hiring has been, and will continue to be, the single most important element of Amazon.com’s success.”

According to the man himself, the value that “surprises people” is Amazon’s fourth leadership principle: “are right, a lot.” “Good leaders are right a lot,” Bezos said at the 2016 Pathfinder Awards in Seattle. “You’re not going to be right all the time, but I think with practice you can be right more often.”

Bezos has gotten a lot of things right, said Sydney Finkelstein, a Dartmouth University professor and the host of the business podcast “The Sydcast.” “His unwritten philosophy is courage and curiosity, which I found to be to the real hallmark of pretty much every great leader that I work with or study,” Finkelstein said.

In an interview with Business Insider in 2018, Bezos said that his time on his grandparents’ ranch taught him the “super important” lesson of being resourceful. “If there’s a problem, there’s a solution,” he said. Finkelstein believes that Bezos’ resourcefulness manifests itself in curiosity, as he maintains a continuous focus on developing new and better ideas that are critical to Amazon’s culture.

A prime example of this is the empty chair Bezos is said to often leave in executive meetings to represent the customer. This exercise is, to Bezos, a study in the quest for customer satisfaction, where not only should the customer’s perspective be accounted for, but it should be understood that the customer is “the most important person in the room.”

He also maintains the email address Jeff@amazon.com and is said to forward customer feedback to relevant executives for action. The loyalty is a two-way street, with Amazon consistently placed at or near the top of the University of Michigan’s annual retail customer satisfaction survey.

“We don’t focus on the optics of the next quarter; we focus on what is going to be good for customers,” Bezos told Forbes in 2012. “We are comfortable planting seeds and waiting for them to grow into trees.”

Finkelstein believes that one of the key challenges for Amazon is that it’s competing alongside Bezos’ other interests for the CEO’s “mindshare.”

He has managed his interests so far by empowering his leadership team. “Bezos is a big delegator,” Finkelstein said. “More than that, he’s willing to go with other people’s ideas, even if he thinks that they might not be the right one. If they are argued well enough, he will accept them, and if they go wrong, they are under control. That’s highly unusual for a leader of a company of this size.”

Finkelstein said that Amazon has taken “sizable chances” on diversifying its offerings, such as expanding into streaming with Amazon Prime and food delivery service Amazon Restaurants. “But when they don’t work, like Amazon Restaurants, they fold them. It costs some money, but they’re not afraid to do it,” he added.

Finkelstein believes that Bezos’ ability to build the right team around him has been a big part of his culture of success – and will be critical as he moves from being the disrupter to the disrupted and businesses target Amazon’s customer base with product innovations, growth opportunities, and better business propositions.

Notable figures who have formed part of his 20-strong executive team include former Prime boss Greg Greeley, who moved to Airbnb in 2018 after 18 years with the company. (Greeley has joined several other executives in a recent exodus from Amazon, which famously had very little turnover during its massive growth years but is now a prime poaching ground for talent.)

“It is typical for companies as they get bigger and more successful and find that they have more to lose, that they tend to become more conservative,” Finkelstein said. “That’s why big companies tend to be the ones to get disrupted, because they start to be afraid. What’s really unusual in Amazon, and something that it has evolved over time, is that as they get bigger, their innovation has accelerated.”

Relentless use of data

Bezos is known to use the word relentless, well, relentlessly. Alongside his focus on the customer, what he calls the “culture of metrics” underpins his decision making.

It has been said that Amazon tracks its performance against around 500 measurable goals – some 80% of which relate to customer objectives. The way Amazon uses data has also been transformational and set a benchmark for companies in the digital age.

Rejecting the classic marketing models of customer persona groups, such as ‘millennial moms,’ the company focuses on personalization of experience and technical rigor. For example, the company’s metrics revealed that 0.1-second delay in the loading of a page equals a “1% drop in customer activity,” according to a 2012 Forbes article on Bezos, so staff are dedicated to work on improving the loading rate.

But these relentless metrics have a price. Amazon has recently been criticized and accused of pushing its employees beyond limits, with examples emerging of workers forgoing bathroom breaks for fear of interfering with productivity stats and warehouse employees even being told to return to work after a colleague died. In response, Amazon raised its minimum wage to $15 an hour and challenged other companies to do the same.

White-collar Amazon workers are similarly pushed to find new limits of productivity, with Bezos himself even telling potential hires that “it’s not easy to work here.” Amazon is metrically driven, and employees have been known to receive 50-plus-page printouts the day before meetings and cold-called for quizzes on the numbers contained in them, The New York Times reported in 2015. Office employees have also complained of punishing performance reviews and a culture where nothing ever feels done or good enough.

Bezos avoids meetings unless they’re absolutely necessary. When they’re unavoidable, he employs a ‘two pizza rule,’ where he won’t have a meeting where two pizzas couldn’t feed the entire room. This is because he believes that the more people in the meeting, the less productive it is.

“No PowerPoints are used inside of Amazon,” Bezos has said. Meetings require a six-page “narratively structured” memo that are read in silence at the start of any gathering. “It has real sentences, and topic sentences, and verbs, and nouns – it’s not just bullet points,” he added. Bezos told the George W. Bush Presidential Center’s 2018 Forum that the memos are supposed to “create the context for what will then be a good discussion,” and that ultimately, they teach the writers about finding the right scope as well as the discipline of drafting and reconsidering ideas.

What sets Bezos apart is how he balances his penchant for efficiency with the courage and curiosity that Finkelstein said is central to everything he does.

“Wandering is an essential counterbalance to efficiency,” Bezos wrote in a letter to shareholders earlier this year. For employees at Amazon’s Seattle headquarters, this means continuing to look for out-of-the-box opportunities, which The Atlantic’s Franklin Foer said allows them “intellectual autonomy.” Once they believe in an idea, employees are encouraged to put it into a ‘six-pager’ for a ‘two pizza’ meeting approval.

The power of ‘blind alleys’

Another key pillar of Amazon’s culture is the “blind alley” approach to innovation. The thinking goes that you reach a dead end when ideas fail, but if customers embrace a new way of doing things, the blind alley opens up into a “huge, broad avenue.”

The theory is based on Bezos’ overarching belief in paying attention to what customers want rather than what everyone else is doing. Or, as he put it in 2004, “if you’re watching your competitors, you’re unlikely to invent a bunch of stuff on your own.”

While the “blind alley” strategy has seen some failures, such as the Amazon Fire smartphone that lasted for one year and is believed to have cost the company $170 million, it’s also seen some huge rewards, such as Amazon Web Services, the signature cloud computing platform that made in excess of $25 billion in 2018 alone.

Maintaining a ‘day one’ mindset

Finkelstein said that another key feature of Bezos’ stewardship is that he’s a digital native as opposed to a digital immigrant.

“The important leadership mindset that has enabled Amazon to its success is the day-one and day-two mindset – and he calls it this internally as well,” Finkelstein said. “Bezos is talking about establishing systems and processes, building out structures that every company has to do to survive and succeed. The problem is that the more you build up these systems and processes to fit the world you’re in, the more difficult it becomes to maintain the day-one mindset.”

Bezos still runs elements of Amazon like a startup, such as being notoriously frugal when it comes to company expenses. There are no hammocks or free meals like you might see at some other internet giants, and none of the executives fly first class (though Bezos has been known for buying a private jet on his own dime).

“When your DNA is day two – which Bezos refers to as established systems, processes, and building out structures that fit the world you are in – it’s very, very hard to convert it back to day one,” Finkelstein added. A good example of a day-two mindset is Walmart, which has been playing catch up to Amazon in trying to become a major player in ecommerce.

“Bezos still thinks as though he’s running a startup,” Finkelstein said. “He maintains an innovative mindset and creative leadership.”

This article was originally published on Insider December 11, 2019.

ROME— Margherita Marino was a successful family lawyer in Naples, running a small but thriving pract...