How to detect business fraud 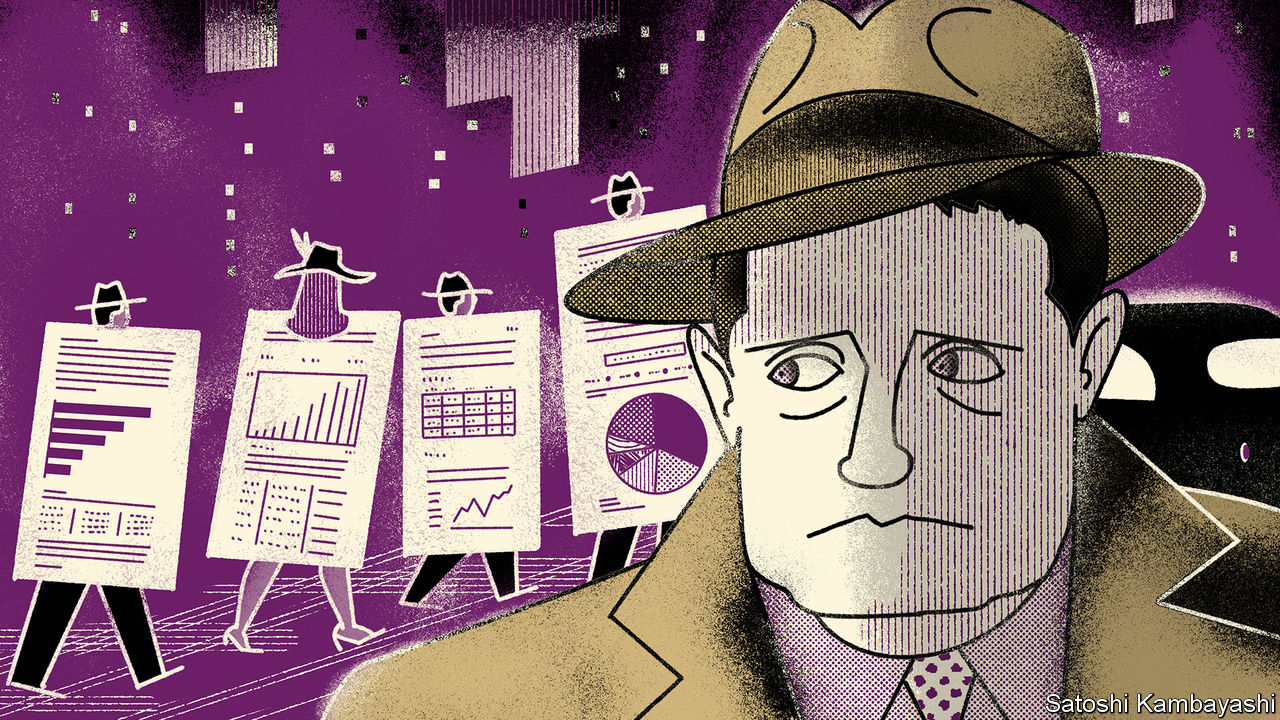 LIKE A LOT of people, Carson Block found his vocation by accident. In 2010 he was living in China and trying to set up a business. His father asked him to look at Orient Paper, a Chinese firm listed in New York. He scoured the company’s filings and became doubtful of its claims. That scepticism grew when he visited a factory. He decided to publish a damning report. But first he would bet against the stock to cover his costs. The report went viral. The share price collapsed. Lawsuits were soon flying.

It has been like that ever since. Mr Block is an activist short-seller. His firm, Muddy Waters, borrows shares in a shifty-looking company and then sells them. That allows it to profit from a fall in their value. There is something of the gumshoe about him—imagine Philip Marlowe, the private eye created by Raymond Chandler, but with coarser language. (Example: XYZ Corporation is a “predatory shit-bag”). Instead of pounding the mean streets, Mr Block ploughs through reams of company documents. He makes his findings freely available. He then shows up on CNBC’s “Squawk Box” to denounce the bad guys.

More appearances seem assured. The stock of covert embezzlement—what John Kenneth Galbraith, a quotable economist, called “the bezzle”—varies with the business cycle. It grows during booms. Tell people that XYZ Corporation is a fraud, and they won’t listen. Short-sellers get short shrift. But the cycle always turns. The bezzle peaks just as boom turns to bust. For short-sellers, these are the good times.

Mr Block made his name angling for Chinese scams. His company’s name derives from a Chinese proverb: muddy waters make it easy to catch fish. China is to stock fraud what Silicon Valley is to technology, he says. But there is plenty of dodgy accounting, albeit of a less blatant kind, outside it. Muddy Waters has evolved into a short-seller with a global purview.

The art of the bezzle is to inflate profits, pump up the stock price and quietly sell your shareholdings to credulous outsiders. But money is not the only incentive. Vanity is also a factor. Jeff Skilling, the boss of Enron, a book-cooking firm that went bust spectacularly in 2001, had an unshakable belief in his own acumen. Executives of his kind tend to serve up the financial results that bolster their own delusions. “Once you’ve been put on a pedestal, once you’re on the cover of Business Genius Monthly, it becomes hard to believe you are fallible,” says Mr Block.

Each stock fraud is fraudulent in its own way. But there are common elements. One is a breach between earnings as defined by Generally Accepted Accounting Principles (GAAP) and non-GAAP measures. Another is an increase in “days payable outstanding”, a yardstick of how long it takes a company to settle bills with suppliers. Delay boosts cashflow, at least for a while. So does gathering more quickly payments you are owed. Firms with dressed-up earnings also tend to pile on debt because they lack strong underlying cashflow. And there are grounds to suspect the worst of companies that engage in a lot of acquisitions. Aligning the accounts of acquirer and acquired gives ample scope for fiddling.

But looking only at numbers is not enough. They need to be cross-checked with other information. Finding it is gumshoe work. There may be clues in the firm’s risk disclosures. Lawyers are skilled at writing these in ways that put readers to sleep, says Mr Block. Stay awake, though, because they occasionally slip something important in between all the guff. Transcripts of conference calls with stock analysts can also be revealing. If the company keeps moving the goalposts, then be on alert.

Muddy Waters has built a reputation for diligent research. A pronouncement by Mr Block has the power to move prices. That worries regulators. Like Chandler’s detective, Mr Block seems to take as many beatings from cops as from bad guys. Even admirers worry about possible errors and lapses. But he is refreshingly candid about his flaws. A sense of alienation from his “postcard-perfect” surroundings as a youth bred an urge to expose the shallow, the vapid and the fake. “When I discovered there were all these frauds in China, it was a form of therapy,” he says.

There are easier ways to earn a living. A few years after shorting Orient Paper, Mr Block totted up the numbers and found that he had lost $600. No matter. He sees no shortage of firms with accounting that distorts reality. “There are real excesses out there.” The bezzle has only grown fatter.

The NFL will use Microsoft Teams to let fans cheer along with players when they score a touchdown September 11, 2020

Source: Microsoft Imagine Patrick Mahomes staring at you after he scores a game-winning touchdown fo...

US existing home sales slumped the most since 2015 last month as coronavirus eroded demand April 22, 2020

MartinPrescott/Getty Images Americans are holding back on buying homes as the coronavirus pandemic r...