Hagia Sophia, a Shifting Symbol in Turkey, Once Again Opens Up to Islamic Prayers

ISTANBUL—Turkish President Recep Tayyip Erdogan attended Muslim prayers in this city’s iconic Hagia Sophia on Friday, two weeks after he declared the building—a museum for the past 86 years—a mosque again in a controversial move aimed at reviving nationalist sentiment.

Wearing a face mask and flanked by his defense minister, Hulusi Akar, Mr. Erdogan sat in the middle of a front row facing the imam. Throngs of people gathered on the square and in the maze of cobbled streets surrounding Hagia Sophia to take part in the prayers.

With its huge dome and towering minarets, Hagia Sophia has long played a starring role in the life of Istanbul. It was once the seat of the Orthodox patriarch of Constantinople, as the city was then known. It later became a mosque after the Ottomans conquered the city. Modern Turkey’s founder, Mustafa Kemal Atatürk, decreed it should be a museum in the 1930s, sending an international message that his young republic had taken a secular turn.

But beginning in 2013, Mr. Erdogan told supporters he would support turning Hagia Sophia back into a mosque if others were full and worshipers needed more space. Seven years later, he put his full weight behind the campaign to turn it back into a mosque, and has since brushed aside criticism from the U.S., Greece, the Russian Orthodox Church and the United Nations as he pursues his longer-term project to boost Islam’s place in an assertive Turkish republic. 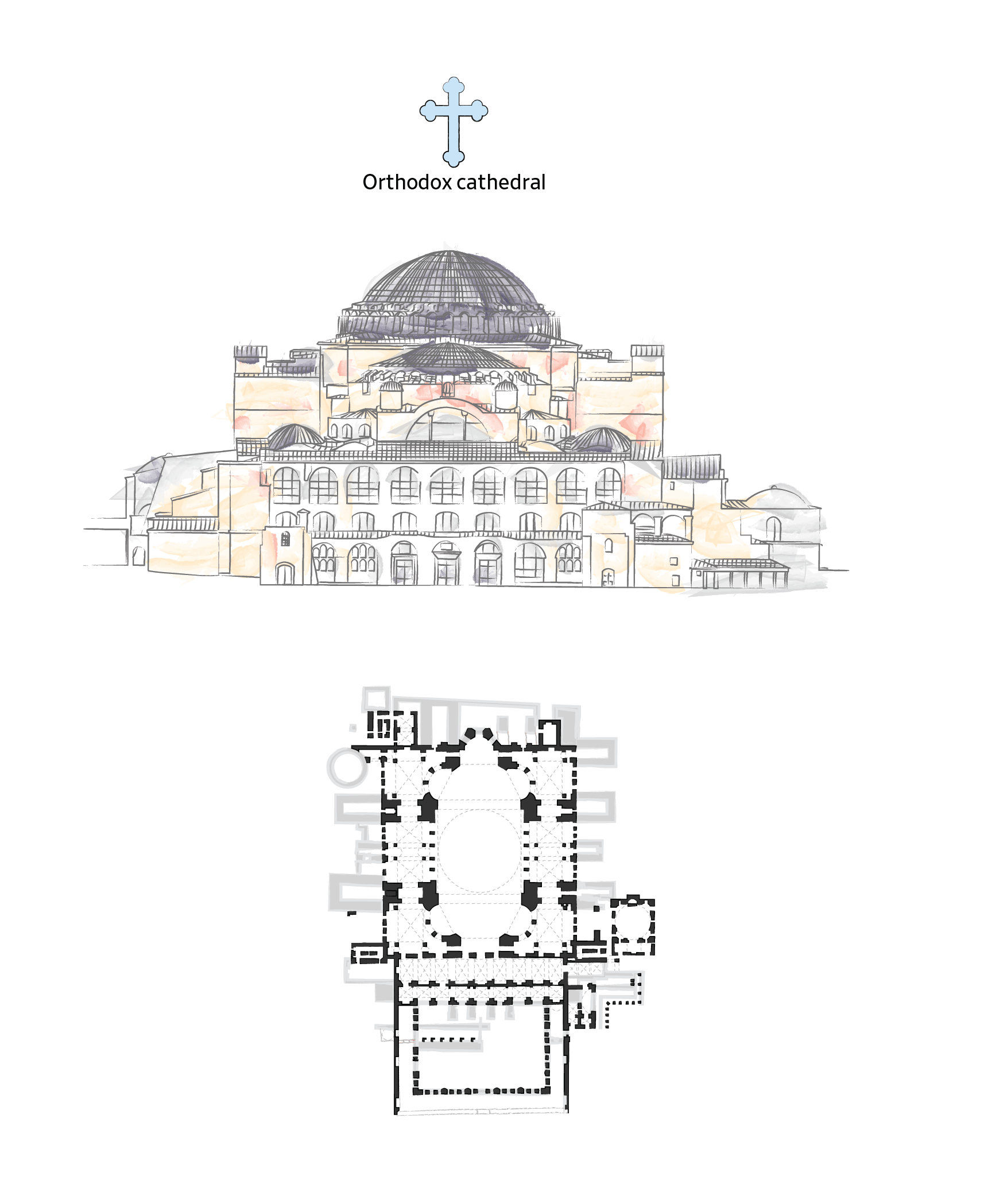 Byzantine Emperor Justinian I oversees construction of the Hagia Sophia cathedral. Construction is completed in under six years. The dome spans 105 feet, making it Christendom’s largest for nearly a thousand years.

Catholic crusaders ransack Constantinople, as Istanbul was then known, seizing priceless artifacts from Hagia Sophia. Some of the marble facing is taken to Venice, where it is used at Saint Mark’s Basilica. The building becomes a Roman Catholic cathedral.

Byzantine forces reclaim control of Constantinople. To celebrate their return, a mosaic of Christ is added in one of the upper galleries.

Ottoman Sultan Mehmet II conquers Constantinople and Hagia Sophia becomes an imperial mosque and a symbol of Ottoman power. The bell and the cross above the dome are removed and a wooden minaret is added. A mihrab, or niche, is also added at an angle aligned with Mecca. Mosaics with Christian iconography on the lower levels are plastered over, but those in the dome and apse remain visible.

Ottoman Sultan Selim II launches a sweeping renovation of Hagia Sophia. Huge buttresses are added to stabilize the dome, repeatedly damaged by earthquakes. Two matching minarets are added on the western side.

A series of drawings from 1710 by Swedish traveller Cornelius Loos shows many mosaics still uncovered. In 1739, Sultan Mahmud I adds a library, fountain, and a school, and covers up most of the remaining mosaics with human representations, including those in the apse.

Sultan Abdulmecid I commissioned brothers Gaspare and Giuseppe Fossati to undertake building repairs and document the Christian-era mosaics before they are covered again. Mosaics with faces of the seraphim, or angels—among the last remaining on view—are finally covered with star medallions.

Eight calligraphic roundels with the names of Allah, Muhammad and his grandsons, and the first four Sunni caliphates are added to replace mid-17th century rectangular plaques.

With Mustafa Kemal Atatürk now leading a new, secular republic, American archeologist Thomas Whittemore in 1931 begins uncovering and restoring the medieval mosaics. Atatürk then orders that Hagia Sophia be made into a museum. Reopened to the public in 1935, the building becomes a bridge between Christianity and Islam as well as a symbol of Turkey’s shift to secularism.

A Turkish court annuls the Atatürk decree under which Hagia Sophia was made a museum. Hagia Sophia once again becomes a mosque.

In a July 10 speech announcing his decision to resume regular Muslim prayer services at Hagia Sophia, Mr. Erdogan described the period during which it was a museum as a painful episode, lamenting that precious Ottoman-era praying carpets were squandered. In contrast, he said the conquest of Constantinople in the 15th century and the conversion of Hagia Sophia into a mosque were “among the most glorious chapters in Turkish history.”

Mr. Erdogan’s push for Hagia Sophia to become a mosque again coincided with a series of political setbacks, most notably last year, when his Justice and Development Party, which is rooted in political Islam, lost control of a number of cities in municipal elections, including the largest, Istanbul.

Now 66, Mr. Erdogan has governed Turkey for 18 years and has often sought to use religion to strengthen his political position. Among other things, he lifted a ban on women wearing headscarves in public institutions in 2013.

The latest twist in the history of Hagia Sophia has had little effect on public opinion in Turkey, however. Polls suggest many Turks are more interested in how their government will tackle the economic impact of the coronavirus pandemic, which has hit tourism and other important industries hard. Some view the move to turn Hagia Sophia back into a mosque as a ploy to steer political discussion away from Turkey’s mounting economic problems, including a slumping currency and a growing concern among investors that it is heading toward a balance-of-payments crisis.

Longer term, converting Hagia Sophia into a mosque might enable Mr. Erdogan to portray himself as a strong leader at a time when Turkey is involved in military conflicts in Syria and Libya—lands once ruled by the Ottomans—and relations with both the U.S. and Russia are under strain.

Hagia Sophia’s history began in the sixth century when Constantinople was the heart of the Byzantine Empire, which had adopted Christianity. The cathedral’s subsequent conversion into a mosque in 1453 accompanied the spread of Islam across the Middle East and parts of Europe.

Throughout its life, Orthodox Christians as well as Muslim clerics have debated what to do with its icons, mosaics and frescoes, and whether they are symbols of devotion or idolatry.

At various points in Hagia Sophia’s life, depictions of Christ and other images have been plastered over and then carefully restored. Turkish officials have taken pains to say that during Muslim prayers, such images will be covered carefully, and have insisted that people of all faiths are welcome to visit the site outside of prayer times and entrance would be free. Mr. Erdogan, too, has said that turning the site into a mosque again wouldn’t compromise its complex cultural and religious identity.

Orthodox Christians are unconvinced, including those in Russia and Greece, who revere the site, which is now called the Hagia Sophia Grand Mosque, as one of the original seats of their faith.

“From our point of view, this decision violates the fragile interreligious and inter-confession balance that has been achieved in today’s world,” Metropolitan Hilarion, a spokesman for the Russian Orthodox Church, said in a statement. “For the Orthodox Church Hagia Sophia is the same as St. Peter’s Cathedral is for the Catholics.”

In Greece, Archbishop Ieronymos II, the head of the country’s Orthodox Church, said that turning Hagia Sophia back into a mosque was an ungodly, defiling act. Bells rang in mourning in several Greek cities on Friday.

Ahead of Friday’s prayer, thousands of square feet of marble floor under the dome were covered with a thick, dark-turquoise woolen carpet while some of the Christian mosaics and frescoes were outfitted with sails-like curtains to veil them during the religious service.

“Without even pounding a single nail,” said Ali Erbas, head of Turkey’s Directorate of Religious Affairs, upon inspecting the curtain system on Thursday.

People prayed at the Hagia Sophia Grand Mosque in Istanbul, Turkey, on Friday.

Fintech giant Adyen says it has no interest in bitcoin as a payment method and clients aren't asking for it February 11, 2021

Databricks adds support for Google Cloud as it prepares to go public February 17, 2021