Ex-Zappos CEO Tony Hsieh has died at 46. Here's how the iconic entrepreneur went from selling pizzas from his Harvard dorm to leading the shoe company he sold to Amazon for $1.2 billion

Zappos CEO Tony Hsieh (pronounced Shay) has died at the age of 46. His death was due to injuries he sustained from a house fire while he was with his brother in Connecticut over Thanksgiving, a spokesperson told TechCrunch.

“The world has lost a tremendous visionary and an incredible human being,” Zappos CEO Kedar Deshpande said in a statement. “We recognize that not only have we lost our inspiring former leader, but many of you have also lost a mentor and a friend.”

Hsieh in August announced his retirement from the company after 20 years, marking the end of a chapter for the eccentric but widely admired entrepreneur.

During his tenure leading the company, Hsieh moved the company’s headquarters from San Francisco to Las Vegas as part of a larger effort to make Vegas the new Silicon Valley. While the full scope of his vision hasn’t panned out, he made a name for himself in the business community and brought noteworthy attractions to the city, including Container Park and the “Life is Beautiful” music festival.

From selling pizza in his dorm room to seeing Zappos acquired by Amazon, here’s what you need to know about Hsieh’s career rise.

While little is known about Hsieh’s early life, he was born in 1973 and grew up in the San Francisco Bay Area. 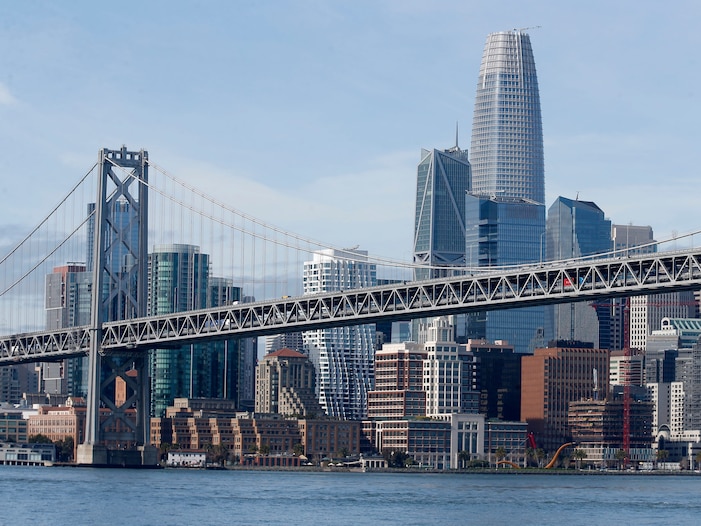 Hsieh attended Harvard, where he sold pizza out of his dorm room with some friends. 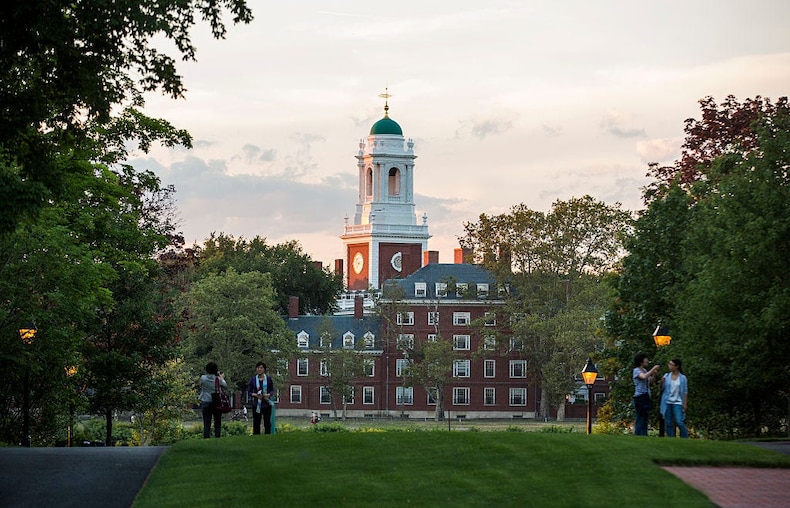 The campus of Harvard Business School and Harvard University, July 26, 2016 in Boston, Massachusetts.

His first business venture after graduating was LinkExchange, which he sold to Microsoft in 1998 for $265 million. 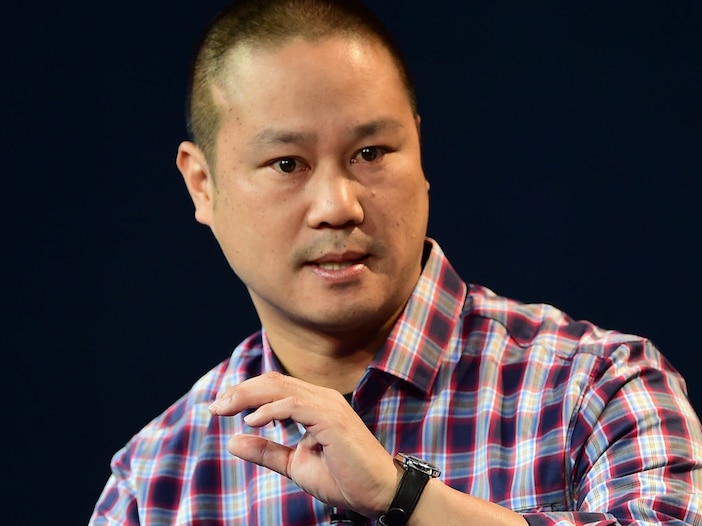 After the sale, Hsieh and his friend Alfred Lin were investing money into “20 or so” companies, including one company that would eventually become Zappos. 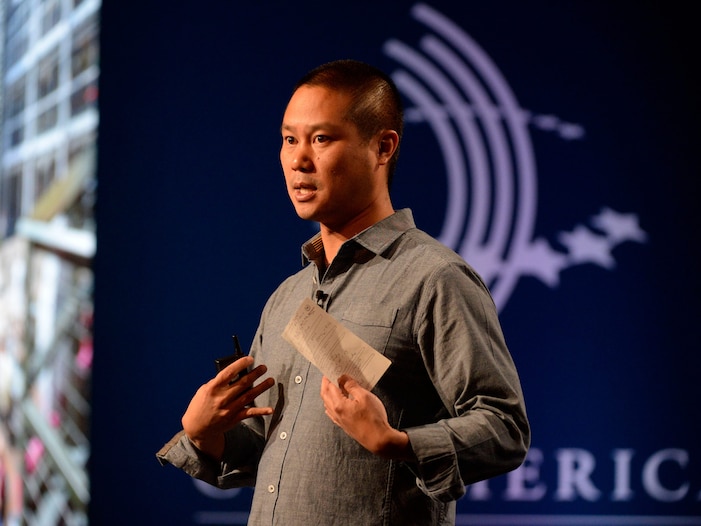 A year later, another entrepreneur by the name of Nick Swinmurn left Hsieh a voicemail telling him about ShoeSite.com (which would later be renamed Zappos.) Hsieh, still uncertain about the venture, joined the company and invested $500,000. 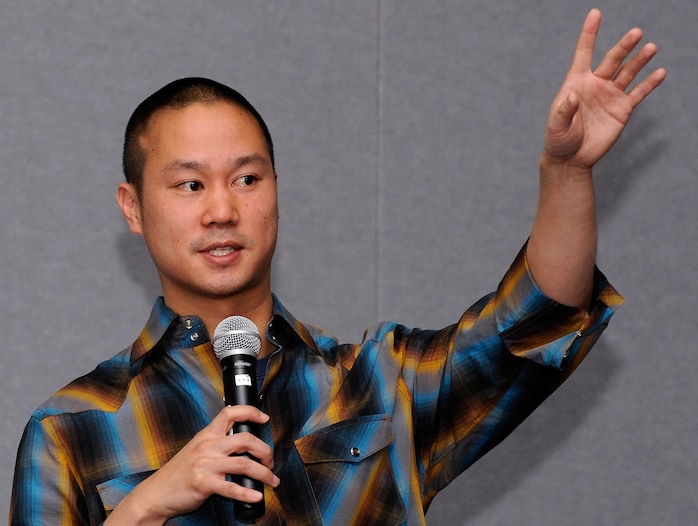 In January of 2004, Hsieh and his team decided to move the company’s headquarters from San Francisco to Henderson, Nevada. Hsieh said the move was based on the lack of people who want to work in customer service in San Francisco. 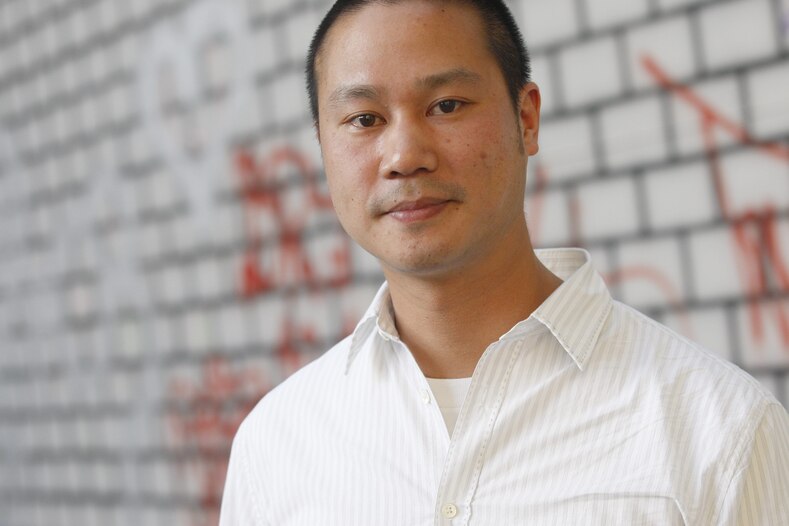 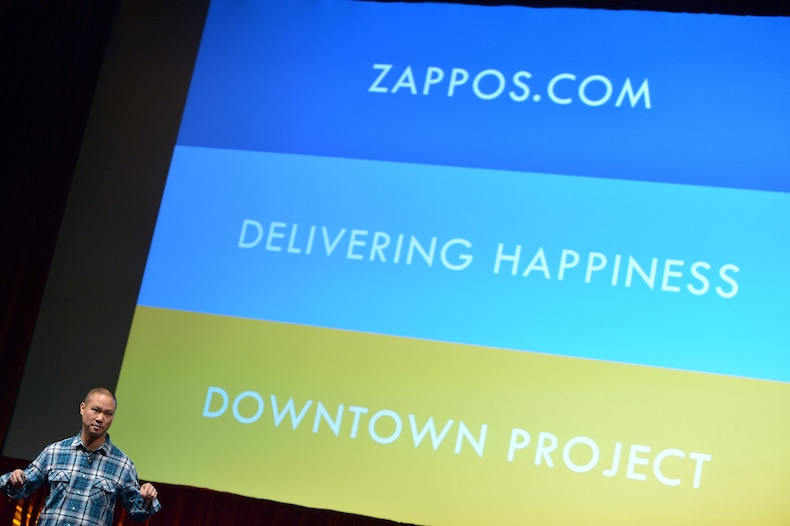 Hsieh moved the company toward Holacracy, meaning employees work in task-specific teams instead of each employee working on their own and then reporting to a manager. 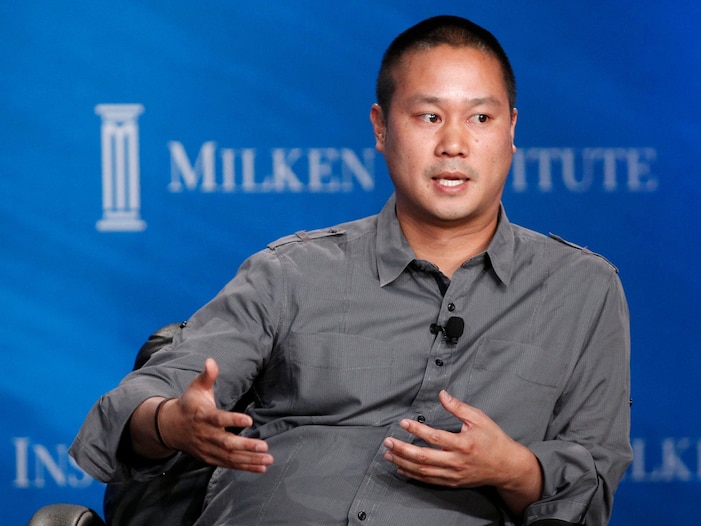 One of Hsieh’s most talked about employee perks is the “Pay to Quit” program, which gives employees a $2,000 quitting bonus if they feel like the company isn’t the right fit after their first 4 months. 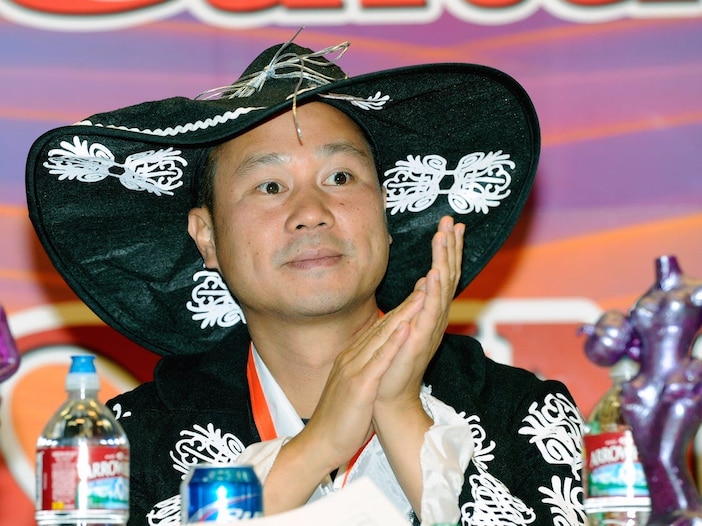 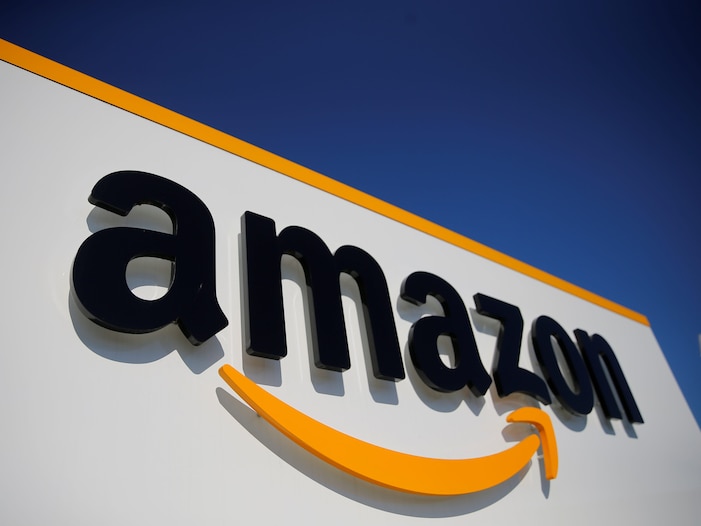 In 2013, Zappos bought the old Las Vegas City Hall and Hsieh moved his team to this new location. The new location is about 30 minutes from the new strip and just a stone’s throw away from Fremont Street. 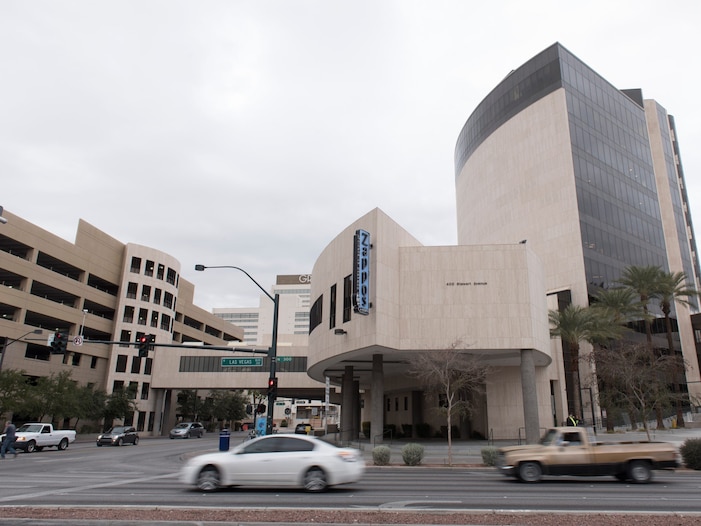 This move was a part of a bigger initiative, Downtown Project, to make Las Vegas another Silicon Valley. Hsieh put $350 million into the project, which included real estate, restaurants, and other ventures. 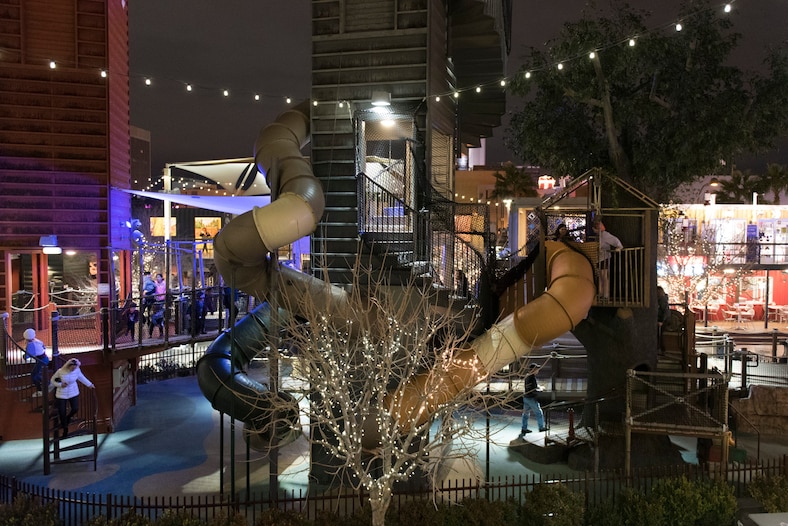 While the initiative garnered mixed results, it did bring some noteworthy attractions to the area, including the “Life is Beautiful” music festival and the Downtown Container Park. 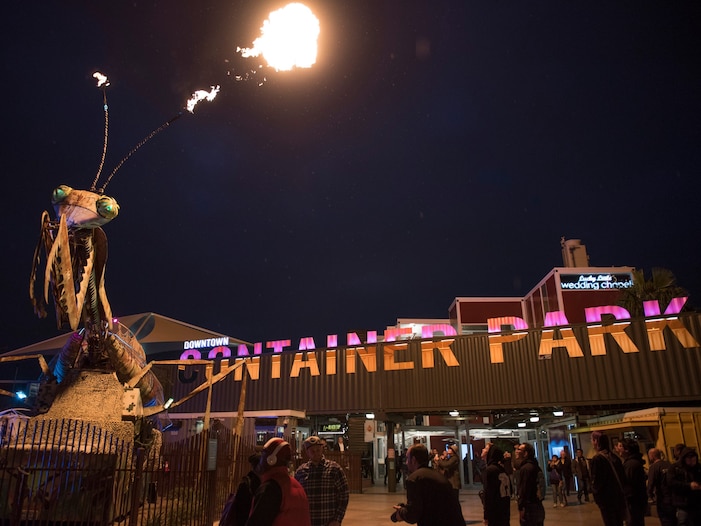 At the entrance to Downtown Container Park a praying mantis structure by artist Kirk Jellum shoots fireballs from its antennason Saturday, January 14, 2017.

Hsieh also lived in the area, in a micro community called “Llamapolis,” which is comprised of tiny houses and Airstream trailers. 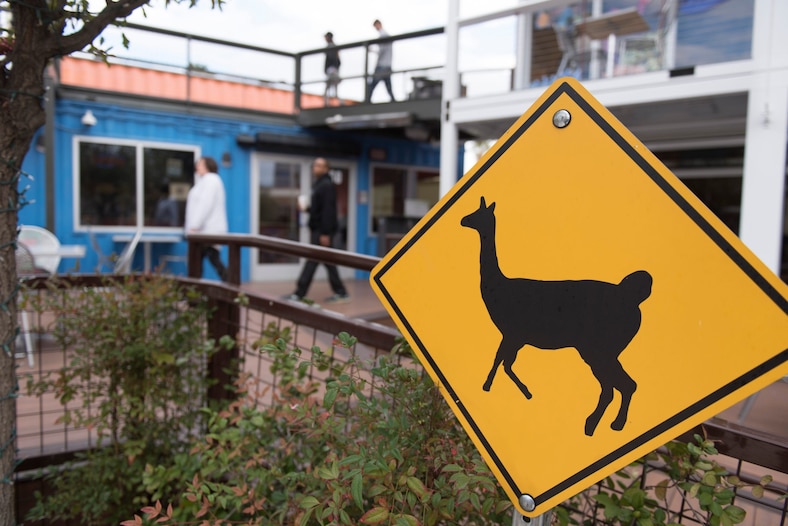 A Llama crossing sign at The Container Park Las Vegas.

Inspired by the artsy community found at Burning Man, Llamapolis is also home to Hsieh’s two alpacas, Marley and Triton. 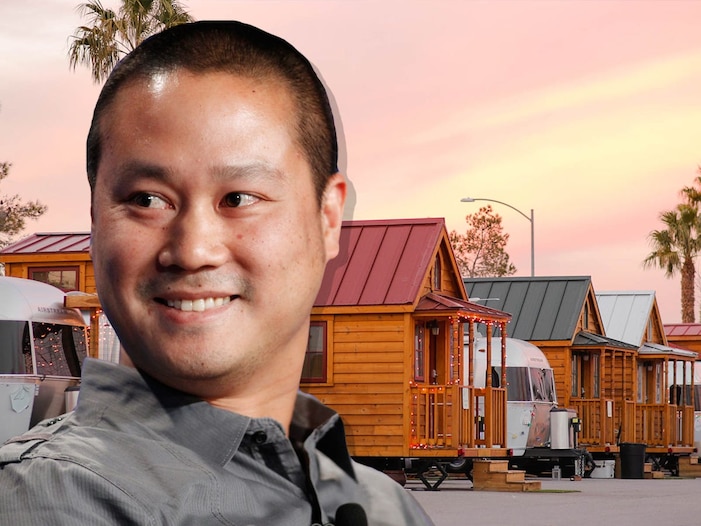 The retiring CEO had a net worth of about $840 million, but he previously told Business Insider that he lived in the tiny community because “[he] wanted to maximize serendipity and randomness in [his] life.” 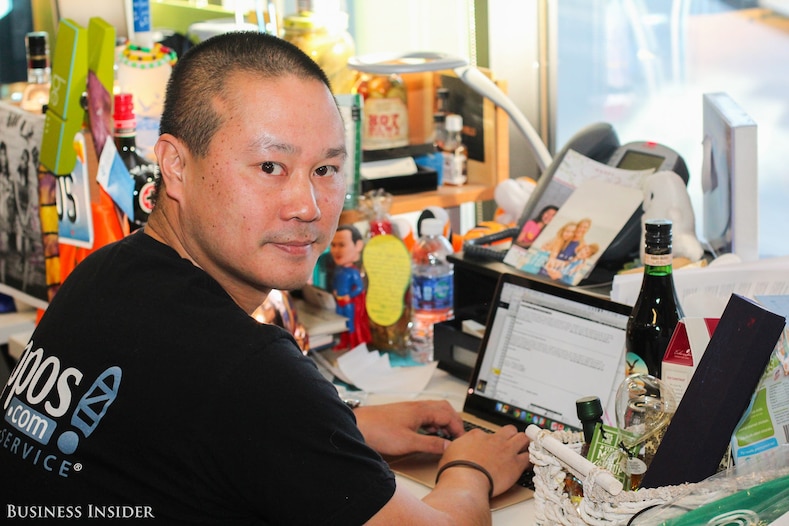 On November 28, TechCrunch reported the CEO had died at the age of 46 after sustaining injuries from a house fire while he was with his brother in Connecticut. 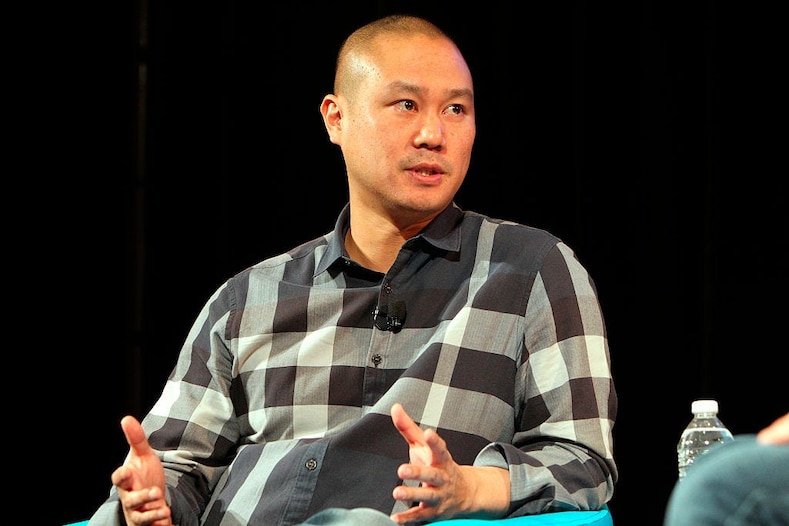 Investors, journalists, politicians, and tech heavyweights spoke out online to mourn the iconic entrepreneur with memories and wisdom from his career. 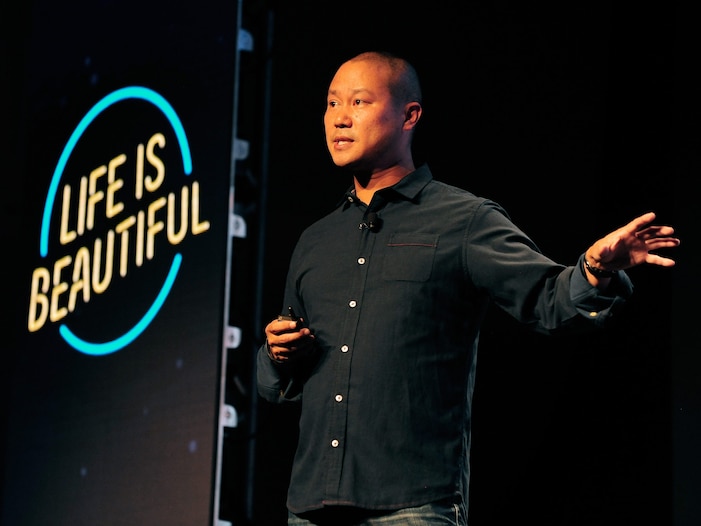 Tony Hsieh speaks onstage during day 1 of the 2015 Life is Beautiful festival on September 25, 2015, in Las Vegas, Nevada.

A Russian-brokered peace agreement halted weeks of fighting between Armenia and Azerbaijan and hande...

Should Parents Involve Their Teenagers in Big Spending Decisions? November 21, 2020

Having conversations about money with teens is seen as a good thing. It’s often the details that get...