Driverless Cars Are Coming, But Not Yet to Take Over

This is the third column in a four-part Heard on the Street series on how “smart” vehicles will affect the automotive, tech and insurance industries.

Driverless cars are moving out of science fiction and onto U.S. roads. But this is just the start of a long journey before they fulfill their transformative potential.

Signs of very early-stage commercialization are emerging from the corporate science projects that want to remove human drivers from vehicles. Alphabet’s Waymo seems furthest ahead with its “robotaxi” project in the suburbs of Phoenix. Customers used to have to sign a nondisclosure agreement to hail a ride with no backup driver, but Waymo opened the service up in October. 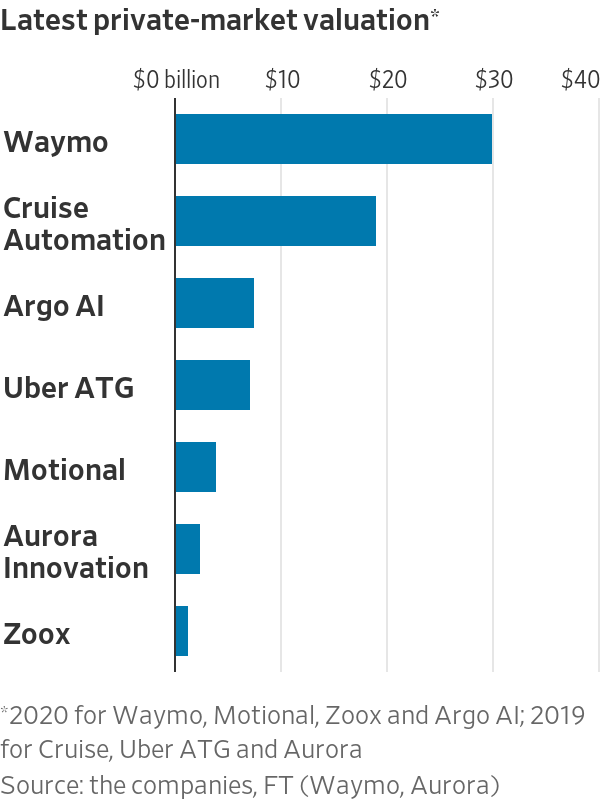 Others aren’t far behind. Motional, a $4 billion joint venture between South Korean car giant Hyundai and automotive supplier Aptiv, said last month that it will take safety drivers out of its test vehicles in Nevada “in the coming months.” Cruise Automation, the driverless-car business controlled by
General Motors,
has said it would remove backup drivers from its test cars in California by the year-end.

Doing without safety drivers is an important milestone, but there are plenty more. Once companies have worked out how to operate robotaxis safely in one urban district in good weather, they will need to adapt to new areas and a wider range of conditions. Eventually, this kind of gradual expansion should give driverless cars the scale necessary to drive down costs and compete with human-driven taxis, public transport and, in the very long run, car ownership.

More From This Series

Such lofty end goals hint at the huge business opportunities and threats that have drawn tech giants, the auto industry and “mobility” providers such as Uber all into the race. For a technology that needs the highest safety standards to secure regulatory and public support, though, the rollout will take years, all the while consuming billions of dollars in capital.

Karl Iagnemma,
chief executive of Motional, pegs the price of an entry ticket into the driverless-car contest at roughly $1 billion. That buys the necessary teams, components development and a test fleet, among other startup costs. Much more will be needed to roll out customer-ready fleets on a commercial scale.

One response to this funding challenge has been partnerships.
Honda
and SoftBank have bought minority stakes in GM’s Cruise Automation.
Ford
and
Volkswagen
are together fielding another challenger, Argo AI. Even Waymo has raised venture capital from outside Alphabet this year.

The other big tech company involved is
Amazon.
Last year it took a small stake in Aurora Innovation, the biggest independent driverless-car startup, which is in talks to take over Uber’s operation, according to a TechCrunch report. This summer Amazon paid $1.3 billion for Aurora’s cash-strapped rival Zoox.

Autonomous-vehicle road testing has skidded to a halt in the U.S. amid the Covid-19 pandemic. But China’s startups have pushed ahead by more than doubling the number of self-driving car projects, with a boost from the country’s 5G network. Photo: Lorenz Huber for The Wall Street Journal (Originally published Aug, 1, 2020)[object Object]

The e-commerce giant’s move highlights the case for driverless goods transport, which has grown louder during this year’s pandemic.

Larry Burns,
a former GM executive who now advises Waymo, expects the commercialization of driverless technology to be driven by freight rather than taxis, partly because logistics is all about operating costs and stands to benefit more directly from removing drivers. Waymo, which was previously laser-focused on robotaxis, in October announced a partnership with Daimler Trucks, the largest maker of big rigs.

Then there is Tesla, which at last year’s “autonomy day” pledged to have one million robotaxis on the road by the end of 2020.
Elon Musk

walked back that promise in April and said it might happen next year. The plan is vague, and it is hard to see luxury sedans as the best foundation for a mass ride-hailing operation.

At what point will you be willing to ride in a driverless taxi? Join the conversation below.

For investors, the question isn’t just how far driverless cars are along the road to commercial viability, but how stoked markets are. After much excitement in 2016 and 2017 about their potential to shake up transportation, a fatal crash involving an Uber testing vehicle in 2018 acted as a sobering reminder that the technology couldn’t be hurried. The removal of safety drivers, assuming it doesn’t trigger more crashes, could start to revive hopes.

Although most driverless-car ventures are, for good reason, part of larger groups supported by other cash flows, it doesn’t seem a bad time to invest in companies with a meaningful stake in their success, such as Aptiv. The total addressable markets are too vast and the disruption story too seductive to ignore.

As hype rebuilds, just remember: Getting driverless taxis to work in a sunny suburb in Arizona doesn’t mean they are on the cusp of taking over the world.

Motional will remove the safety driver from test vehicles in Nevada. An earlier version of this article incorrectly said Motional plans to remove them from its
Lyft
robotaxis in Las Vegas. (Corrected on Dec. 2)

Write to Stephen Wilmot at stephen.wilmot@wsj.com

With the GAM office located in Seoul, it’s impossible not to notice that South Korea is booming. Sou...

Photo by Supoj Buranaprapapong The federal government has begun depositing the first round of corona...